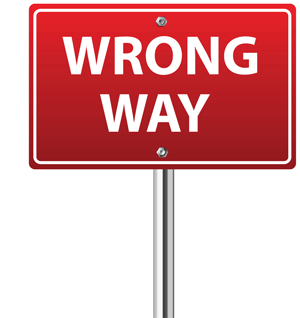 In Phoenix and surrounding municipalities the signs on freeway exit ramps are big and red stating Wrong Way / Do Not Enter. And other warning signs in different sizes are on other thoroughfares.

A first time wrong way arrest for an event that did not result in injury or death under Arizona Revised Statute §1383.A.5. elevates a usual Class 1 DUI misdemeanor DUI to a Class 4 felony.

This law made it illegal to drive the wrong way on any road. Criminal defense attorneys, including myself, note that the revised law says “driving the wrong way on a highway” but it does not define what a highway is. So the revised law expands the offense to surface streets as well. What previously would have been a low level DUI with one day in jail was increased to four months in state prison for wrong way offenders.

A wrong way crash also will lead to additional felony charges for injuries and deaths with harsh punishments if convicted. Beyond the criminal charge, the victims of a wrong way crash can sue the driver in civil court to recover financial burdens and additional compensation for punitive damages. The threshold for winning a civil cases is far less than what it takes to win a criminal case.

ADOT’s placing of the cameras on I-17 was the first use of these cameras in the entire nation. (See the cameras in action.) The agency began using them on I-17 in January 2018 between the “stack” interchange near downtown Phoenix and the Loop 101 interchange.

ADOT Traffic Operations can promptly send warning messages alerting drivers of a wrong way motorist in the area. At this writing, the cameras have so far spotted 22 wrong way drivers.

The Arizona Republic reported that in Arizona between 2016 and 2019 wrong way wrecks claimed the lives of 72 people and of those deaths 44 involved alcohol.
An ADOT study reported that 269 wrong way crashes happened between 2004 and 2014, with the majority of them occurring between 6 p.m. and 6 a.m. and 65 percent of them involving impairment by alcohol or drugs. The majority, 57 percent, occurred on weekends.

The Federal Highway Administration found that on average between 300 and 400 people are killed each year in the U.S. because of wrong way drivers, which accounts for 1 percent of the total number of national highway fatalities.

Arizona legal limit is 0.08 percent blood alcohol concentration (BAC) but higher levels increase the seriousness of the charge to an aggravated factor with increased punishments. A driver can be charged with a DUI even if the BAC is less than the legal base line. This is a result of Arizona’s zero tolerance policy for impaired driving. So a driver who is just slightly impaired can face a DUI charge.

Most cases of entering a road going the wrong way involve alcohol or drug impairment, but so can a driver who is disoriented. Disorientation can be caused by delirium or an abnormal brain function that is temporary. Dementia is a recurring issue that affects the mind. Even an infection in the brain or a reaction to a medication can cause confusion.

Other wrong way factors include distraction, the road was not familiar to the driver, poor visibility, drowsiness, poorly marked freeway ramps, and drivers of advanced age with visual or cognitive issues.

If a wrong way driver was not impaired by alcohol or drugs and did not cause a crash or injury, the driver can be assessed a civil penalty with a fine of $500 and a court order to attend and finish traffic survival school under Arizona Revised Statute §28-694.

A felony conviction has long arms. Felons lose the constitutional right to keep and bear arms, the right to vote in elections or hold public office, and makes holding or getting a job or to rent a place to live problematic. Those who have a professional license, such as teachers, nurses and other professions will have their license revoked. The felony conviction will follow the offender for 99 years.

Other than prison a convicted wrong way driver faces fines and surcharges totaling $4,675.50 and the license to drive is revoked for one year. After 90 days, a restricted license to drive to work or school can be issued. To get the license requires the person to purchase a SR-22. (SR stands for safety responsibility.) That is not an insurance policy. It is a certificate proving auto insurance coverage is in effect.

It is best at the arrest to invoke your right to remain silent and to have an attorney during interrogation. Each wrong way case is unique in its set of facts which can determine the defense strategy, but these are the common defenses:

If you or a loved one has been arrested, it is crucial to have experienced legal representations at the earliest possible time. Aaron M. Black Law fights hard for good people who find themselves in bad situations.

I actually tried the first wrong way driving DUI to a Jury in Arizona State history.

I have years of experience defending criminal cases always with the goal of achieving an acquittal, getting the charge dismissed; or if these are not possible, negotiating with prosecutors to reduce the charge to a less serious offense.

In selecting me to build your defense, you will always have direct individual communication with me and you will never be handed off to an assistant.

Launch your defense by calling 480-729-1683 at any time on any day, including weekends and holidays, and I will promptly return your call unless I am at trial or in court. Or use my online contact form.

I defend wrong way driving charges and other criminal cases in justice, municipal, state and federal courts in Phoenix, Scottsdale and other cities in Maricopa County.