What if I refuse the preliminary breath test? 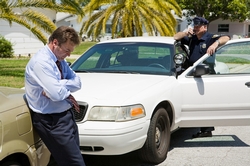 If you have been pulled over for suspicion of a DUI in Maricopa County the police will often ask you to blow into a Preliminary Breath Test (PBT). You have the right to refuse the field sobriety test as it is only used by the police to obtain a probable cause to arrest you and it is not admissible in court. Although popular belief is that your license will be suspended if you refuse the PBT, this is not the case.

Many people confuse the PBT with the blood/breath test that is administered after a person has actually arrested for a DUI in Maricopa County. In this case if you do not give breath/blood after you have been taken to the station, your license will in fact be suspended for a year. This is called “Admin Per Se/Implied Consent.”

Arizona’s Implied Consent law states that if you are arrested lawfully by an officer who has grounds to believe that you have been driving under the influence of drugs or alcohol, then you automatically consent to taking a breath, urine or blood test to determine your blood alcohol (BAC.) However, before you submit to the blood/breath test always ask for a confidential phone call with a DUI lawyer.

As a DUI Lawyer representing clients in Maricopa County, at the Law Office of Aaron Black, my ultimate goal is to achieve the dismissal of your case and I will aggressively and personally defend you in court against the DUI charges against you.

Unlike large firms that want as many cases as possible I represent a limited number of clients at any given time which allows me to give the personalized service that you expect from a DUI attorney.

If you have been arrested for a DUI in Maricopa County and you refused the PBT please contact Phoenix DUI Defense Attorney Aaron Black or call 480-729-1683 to discuss your case today.