What does Dismissed to the Grand Jury mean? 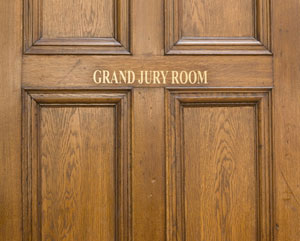 The language of the law can be confusing. “Dismissed to the Grand Jury,” for example, doesn’t mean your case is dropped and you can go on your merry way. The phrase means the prosecution is presenting its case in secret to a grand jury, which will decide if enough evidence exists to charge you with a crime, instead of using the preliminary hearing procedure. Felony charges are serious offenses that, if convicted, mean harsh prison sentences, significant fines, years of probation after completing the prison term, and the loss of civil rights including the right to vote and possess a firearm.

Grand juries, be they county, state, or federal, are established under the Fifth Amendment of the U.S. Constitution and are meant to hold their sessions in secret. That’s because the prosecution, which presents the evidence from the state’s witness, doesn’t want the person potentially being charged to know about it. Moving a case to the grand jury is at the discretion of the prosecution.

Secrecy serves to prevent the quarry who is unaware of the investigation from fleeing, additionally it preserves evidence and facts, and protects the reputation of the person involved should the grand jurors decide not to hand down an indictment, which lists the formal charges. Also, cases dismissed to the grand jury can be sensitive, such as sexual assault, and the prosecutor wants to avoid a public legal procedure.

If the individual knows the case has gone to the grand jury, the person cannot attend the session, raise a defense or be represented by an attorney. If you know the grand jury is involved it’s likely you refused a plea deal, so the state goes to the grand jury.

Secrecy continues so you and your defense lawyer can’t talk to others about what happened and the court reporter’s transcript is sealed.

At least nine county and state grand jurors must vote to hand down an indictment. If the grand jury issues an indictment, the case moves to Superior Court for arraignment, pretrial conference and trial.

Preliminary hearing before a Commissioner

Beyond the Maricopa Grand jury, the state may present its evidence during a preliminary hearing before a commissioner of the Regional Court Center.

This public procedure is far different than the secretive grand juries in that the defense is allowed to conduct its own investigation of the alleged crime, challenge the state’s evidence, motion to suppress evidence if it was not legally obtained and may develop and present its own evidence.

The preliminary hearing judge considers both sides and determines if the state has enough evidence pointing to that the defendant probably committed the offense. If so, the case is moved for trial in Maricopa County Superior Court. The defendant can choose if the case is heard by a jury of peers or a judge.

Who are the grand jurors?

Just like jury pool selection, the people who are chosen to be on grand juries are selected by computer at random from vehicle registration lists and records kept by the Arizona Department of Transportation.

Arizona law prevents the following from serving on any jury. Also, people who are at least 75 years old can be excused from jury duty if they provide a written request to the jury administrator to do so.

The Maricopa County Grand Jury and the Arizona State Grand Jury are comprised of between 12 and 16 people while the Federal Grand Jury is at least 16 and a maximum of 23.

Although you can’t have an attorney in the secret grand jury hearing you will definitely need a competent criminal defense lawyer afterward or during the hearing should the grand jury allow you to attend. Although the grand jury indictment and preliminary hearings are different, the result is usually the same which is binding the defendant for trial.

Police and prosecutors rely on the evidence pointing to your guilt and sometimes don’t consider evidence that is contradictory or in your favor. I conduct a thorough independent investigation for my clients, analyze the state’s evidence for flaws and build the best possible defense for trial. If police violated your constitutional rights any evidence stemming from that violation can be suppressed.

At a pretrial conference, the prosecutor and defense attorney meet with the judge assigned to the case to review the evidence and a plea agreement if one is offered. The judge rules what evidence can be used and not used at trial and must approve the sentencing provisions of the plea agreement.

It’s true that most criminal cases are settled with a plea agreement. If the defendant is agreeable to entering a plea, usually to a lesser charge with a reduced sentence, it’s my job to negotiate for what best benefits my client. It’s totally up to the defendant to enter a plea or exercise the Constitutional right to a fair trial.

If you or someone you know has a case that has been dismissed to the Grand Jury, contact the Law Office of Aaron Black for a free consultation or call (480)729-1683 today.