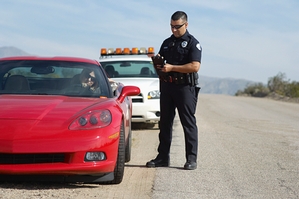 Vehicles have a reduced measure of privacy that’s afforded to homes and other enclosures in Scottsdale, AZ. The reason is they’re mobile making it impractical to obtain a search warrant. This is known in law as the mobile conveyance exception.

The exception gives authorities more power over vehicles because they can leave the scene of a stop, flee the court’s jurisdiction, or when the situation requires immediate aid or action upon law enforcement. Traffic stops are dangerous to officers and searches to ensure their safety is another factor.

The U.S. Supreme Court during prohibition in 1925 sanctioned warrantless searches of vehicles. The case involved two men who were known to be trafficking illegal liquor and suspected to be in possession of it. They were stopped while traveling on a Michigan highway. Without a search warrant prohibition agents found liquor behind the car’s rear seat because they had probable cause.

Probable Cause and Reasonable Suspicion

The keys to legally performing a warrantless search in Scottsdale, AZ is that law enforcement must have a probable cause or a reasonable suspicion.

Probable cause is defined as a reasonable person believes that a crime has been or is being committed.

In plain view occurs when an officer looking from a lawful place sees contraband or evidence of a violation of law. The officer is allowed to seize the item without a warrant.

For example, during a traffic stop this year in New York an unrestrained 3-year-old girl removed a bag of marijuana and a smoking pipe from under a seat and showed them to the trooper. The contraband was now in plain sight and the child’s mother and boyfriend were arrested for possession and child endangerment because she wasn’t in a child seat.

U.S. Supreme Court in May 2018 ruled 8-1 that searches of vehicles parked at a private residence or on the property of a residence, in general, must have a warrant before conducting a search.

In that case the justices ruled that police in Virginia violated a person’s Fourth Amendment rights when an officer walked up a driveway and removed a tarp covering a motorcycle parked adjacent to a home. The officer ran a search of the motorcycle’s license plate and discovered it was reported stolen.

The high court sided with the person convicted of possessing stolen property ruling that the Fourth Amendment applies not only to the home but also to its surrounding property, called “curtilage” in the law.

Giving Permission for a Vehicle Search

During a traffic stop police in Scottsdale, AZ may ask for your permission to search your vehicle. You don’t have to consent. An officer may be disgruntled if you don’t give permission but you’re protected from self-incrimination under the Fifth Amendment and you’re well within your right to refuse permission. If you refuse be polite to the officer and say you’re standing on your constitutional right.

Also, if you consent you can dictate the extent of the search, such as limiting it to the trunk or the glove compartment. You have the right to restrict the search to a particular area even after the search is started. But if the limited search produces probable cause the search becomes unrestricted.

If you refuse to give permission you’re tasking the officer to have probable cause or reasonable suspicion for the search to justify obtaining a search warrant and detaining you until it’s issued. Warrants can be obtained from a judge relatively quickly.

In some limited situations police can search your vehicle without a warrant or your consent. For example the officer hears someone in distress coming from the trunk, or has a reasonable suspicion that searching is necessary for the officer’s protection, or you are under arrest and the search is restricted to the arrest.

If your car is impounded police are entitled to make a list of items found in the car and any evidence or contraband found while making the list can be used against you.

When authorities violate your Constitutional rights any evidence they find cannot be used against you in court under Arizona’s exclusionary rule. Often that results in your case being dismissed, but it’s up to the defense to prove your rights were violated. Your defense attorney will prepare a motion to suppress to be decided by a judge at the pretrial hearing stage of criminal procedure.

Don’t give up before you start!

At the traffic stop it’s in your best interests not to answer questions to avoid incriminating yourself. But be respectful and polite when declining to answer and invoke your right to have an attorney present and the police interview will stop.

Don’t think that you can talk your way out of a situation. I’ve never seen that work.

A qualified criminal defense attorney is necessary to represent you. I invite you to take advantage of my free case assessment. I can evaluate the strength of the case against you and explain the possible defenses that may be available to you.