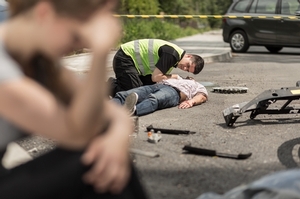 Your car or truck is considered a dangerous instrument under Arizona law, and if it’s used in the commission of a crime while driving in Phoenix, AZ, prosecutors can add vehicular endangerment to the initial criminal offense.

Reckless is a severe deviation from the standard of care toward others by exhibiting an extreme indifference to human life or risking serious injury to someone. Evidence must show that you were aware of the substantial risk of injury and consciously disregarded it. A substantial risk is something that is likely to happen, not merely a possibility, and imminent means now or quickly to occur.

This law is terse and purposely broad. Police can charge you with vehicular endangerment even if no one was hurt or killed or even if there wasn’t anyone else around when the officer witnessed “recklessness” in your driving. And it’s the officer’s own perception of what is reckless at that moment.

Arizona’s endangerment law also can be applied widely by authorities to situations behind the wheel, such as child endangerment when a driver has an unrestrained child in the vehicle while aggressively darting through freeway traffic.

Endangerment can also be added to other charges. For example a driver, who has just committed a robbery and then hits another vehicle injuring someone while trying to escape and speeds away from the scene of the crash, can be charged with robbery, leaving the scene of a crash and vehicular endangerment.

Vehicular endangerment and a DUI in Phoenix, AZ

Prosecutors often file vehicular endangerment charges along with driving under the influence (DUI) that can increase the severity of a sentence if convicted and, if need be, serve as a negotiation tool.

Operating a vehicle while “slightly impaired” by alcohol or drugs, even prescription drugs, is violating Arizona’s strict no tolerance policy. That policy allows a DUI conviction even if your blood alcohol concentration (BAC) was below the legal limit of 0.08 percent. Body weight, individual metabolism, and tolerances to intoxication by experienced drinkers impact these levels.

A first-time DUI conviction in Phoenix, AZ includes a minimum of one day and up to 10 days in county jail along with fines reaching $1,250. The court also requires a device that prevents a vehicle from starting if alcohol is detected by a breathalyzer paid for by the user. Aggravated and super DUI convictions carry much harsher punishments.

The state may also allege vehicular endangerment for those cited for excessive speeding, which is driving at 85 mph or faster, driving 20 mph over the posted limit, or driving at 35 mph approaching school zones, if the situation involved injury or risk of harm.

Other related offenses include street racing, hit and run, serious accidents, fleeing from police particularly at high speed, assaulting someone with a car or truck, and vehicular manslaughter.

Vehicular endangerment is charged as the lowest felony, a Class Six, if the driver’s action places someone at the risk of imminent death. All other circumstances are classified as Class One misdemeanors, the most serious of Arizona’s misdemeanor offenses.

What are the consequences of a Vehicular Endangerment conviction?

A felony conviction involving a vehicle can result in revocation of your driver’s license. When the revocation period is concluded the license will continue to be revoked until the Arizona Department of Transportation conducts an investigation to determine if your license will be reinstated. If a Class One misdemeanor conviction happens your driver’s license can be suspended.

Beyond the criminal sentence a conviction becomes public record and can inhibit your chance of keeping your job or finding employment and even prevent you from renting a place to live because background checks will find the conviction. The fines imposed and the cost of your defense can cause serious financial considerations.

In many cases the officer who witnessed the recklessness or dangerous driving is basing the conclusion on the officer’s “training and experience.” The defense attorney's job is to challenge the officer’s training, observation, and perceptions. Every case is different so other defenses may be available to you.

To avoid the expense and time for a trial the prosecution may be inclined in some cases to offer a lesser included charge reducing vehicle endangerment to the less serious reckless driving, which has advantages with less severe sentences.

Your defense attorney can also propose and negotiate a plea agreement but only with your permission. And if you don’t like the offer you can reject it and go to trial.

How do I find a qualified defense attorney in Phoenix, AZ?

If you or a spouse have been charged, you’re both facing a life changing experience and you’ll need a highly qualified vehicular endangerment defense attorney to represent your interests.

You can search reputable sites online, including AVVO.com, NOLO.com, and SuperLawyers.com, to evaluate an attorney’s skill and experience. Also consider a member of these criminal defense organizations, NACDL and AACJ.

You’ll need a defense attorney who is a skilled and successful litigator to stand by you, believe in you and prepare a solid defense.

To get a clear picture of what you’re facing I invite you to take advantage of my free, no obligation consultation. I’ll evaluate your side of the story and assess your options and possible defenses.

Contact the Law Office of Aaron Black to learn more about vehicular endangerment or call 480-729-1683.