Phoenix Arizona DUI Trials - How Jurors are Chosen by Attorney’s 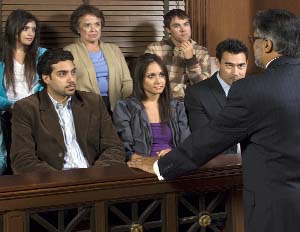 The majority of seriously impaired driving cases in Phoenix Arizona never go to trial. But some cases are adjudicated using the jury system. A speedy, pubic trial decided by jurors is guaranteed by the Sixth Amendment of the U.S. Constitution and written into Arizona’s constitution.

Those summoned to jury duty are randomly selected from lists held by Arizona voter registration and Motor Vehicles Division issued driver’s licenses. Jurors must be U.S. citizens, at least 18 years old, live in the court’s jurisdiction, and be physically able to sit through the trial. People who have been convicted of a felony and have not restored their civil rights cannot serve on juries.

Arizona impanels six jurors and an alternate for misdemeanor DUI cases and 12 jurors and four alternates for felony charges.

Jurors are chosen in a process called voir dire, a combination of Old French and Latin meaning to speak the truth. They are selected from a pool of people who answered a summons to appear for jury duty. In the courtroom they are interviewed by the prosecution and defense lawyers with the goal of choosing those who can be fair and impartial -- the standard of the jury process.

Another goal, more importantly, is to weed out those who may not fit this standard. They may have a prejudice toward the defendant. They may hold a bias from some unrelated event, or perhaps they are just unwilling to make an independent decision and will just go along.

The judge will ask potential jurors if they have obstacles coming up during the course of the trial, such as an upcoming surgery, that would cause hardship if seated on the jury. A juror also must have the ability to hear and understand the trial testimony and the judge’s instructions to the jury before they begin deliberations.

The best Phoenix DUI attorneys focus on three components during the interviews with prospective jurors, which is more of a conversation than a grilling, in selecting who from the jury pool will sit in judgment of the defendant. These three areas are:

Background – the level of education, the occupation, training, socio-economic level, what media they use, what they search for online.

Experience – what personal experiences they have, such as if they were a crime victim, have they ever driven after drinking, do they personally know someone who was charged with a DUI, have they served on a jury in a previous DUI case, perhaps they have heard or read about the case before them, and how these experiences might affect weighing the evidence to be presented, and assessing the credibility of witnesses.

Opinions, beliefs and values – This area is crucial in determining who will serve because they reveal the filters a person uses to make decisions.
The questions need to be open-ended to let prospective jurors express themselves. The more they talk the more the lawyers learn in assessing individual attitudes. The lawyers also need to be aware of opinionated jurors who could “hang” the jury causing a mistrial.

It is also instructive for the lawyers to observe body language, facial expressions, voice tone or hesitancy in answering as clues to a prospective juror’s fitness for duty.

After the potential jurors are interviewed, the opposing lawyers make their own decisions as to who should not serve on the jury. This is known as “challenge for cause.” Jury pools are large enough that both sides can use this challenge. A judge can also dismiss jurors who do not perform well during the interviews.

The jury pool may have people who fall into one of two bias categories, actual or implied.

Actual bias happens when a prospective juror states that he or she would not be able to be impartial because of religious beliefs or a moral objection to using alcohol or drugs.

Implied bias occurs when a potential juror exhibits a personal experience or character trait stemming from the interviews that make it uncertain that he or she could be impartial. Implied bias can also be related to the person’s experience or background that is likely to have a predisposition to favor either the defendant or the prosecutor.

Should too many prospective jurors be eliminated, the judge may ask the Jury Office to send more prospects or the judge can proclaim a mistrial.

Attorneys are allowed to have a judge decide the outcome of the trial based on the evidence presented, including expert witness testimony. Judges are better equipped to apply the law. A jury of a defendant’s peers can be uncertain to some degree as they discuss the evidence and testimony and follow the judge’s instructions to the jury.

A felony DUI conviction at trial has a dramatic impact on a person’s life with a criminal record that stays on the books for life. Incarceration in prison is certain along with significant fines and surcharges. Felons lose the right to own or possess a firearm and cannot vote in elections or hold public office. Employment becomes more difficult to find and professional licenses are suspended or revoked. Landlords can refuse to rent or lease a place to live.

Even a misdemeanor DUI conviction results in at least one day in jail, suspension of the privilege to drive, fines, restrictions, increased insurance rates, and a criminal record.

Experienced Phoenix DUI attorney at your side for the defense

The law allows for several DUI defenses to fit situations. A great amount of preparation for trial is necessary and in using Aaron M. Black Law for your defense you will have personalized service throughout the entire process and you will never be talking with anyone but me.

The law office of Aaron M. Black has a long history of aggressively defending DUI and drug impaired charges, always with the goal of winning a dismissal of all charges.

Launch your Phoenix DUI Defense by calling 480-729-1683 at any time day or night, weekends or holidays and I will promptly respond unless I am in trial or appearing in court.

I defend impaired driving charges in Phoenix, AZ including federal, state, municipal and justice courts in and surrounding Maricopa County.