With a great deal of pride, I am pleased to announce that I have been chosen as a Top Valley Lawyer 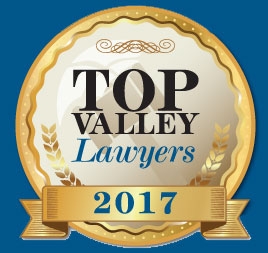 . Top Valley Lawyers are chosen by a third party attorney ranking system. The third party ranking system, AVVO is a Seattle based company that assists consumers in making legal decisions by offering by ranking and providing profiles for 90 percent of the lawyers in the country.

AVVO also offers a free question and answer forum, and visitors can view how a Lawyer is ranked according to their professional background by AVVO’s proprietary algorithms.

I began as a Maricopa County Public Defender after passing both the Arizona and South Dakota Bar Exams. During that time I realized that being a prosecutor was not something that I wanted to pursue and I began to focus on DUI and Criminal Defense.

As a Deputy Public Defender, I defended hundreds of individuals charged with serious felony offenses including assault, burglary, the sale of narcotic drugs, murder and almost every other crime in Arizona. With each client that I defended I gained a great deal of knowledge with each case which has allowed me to hone my skills.

I view my job as a check and balance on the Police, Prosecution and the Courts as we all have a constitutional right and I’m proud that I can guarantee my client rights are protected in the courts. My job is to focus my attention on whether or not the Government can prove their case beyond a reasonable doubt.

In my time as a criminal defense attorney I have spent countless hours in the courtroom and argued well over 50 trials allowing me to sharpen my skills to provide the best possible defense for my clients.

For personal criminal defense representation when your freedom is at risk, contact the Law Office of Aaron Black or call 480-729-1683 to set up a free consultation today.