If a minor gets a DUI in Phoenix, AZ is it a felony or misdemeanor? 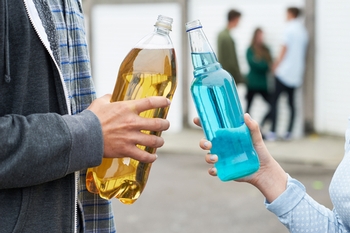 Teenagers between 14 and 17 who are caught drinking and driving face serious consequences if convicted under the so-called “baby DUI.” The state will file either a misdemeanor or a felony charge based upon the facts of the case and the minor’s record.

To begin, Arizona has some of the most strident DUI laws in the nation with a “zero tolerance” policy for adults and minors who are just “slightly impaired.” A person can be slightly impaired without reaching the baseline illegal blood-alcohol concentration (BAC) of 0.08 percent.

Minors, however, if they have any amount of alcohol in their systems can be charged with a class 1 misdemeanor, the most severe of misdemeanors, and the state doesn’t need to prove the baseline BAC. The case is assigned to the Juvenile Court for those younger than 18.

Zero tolerance was adopted to curb the frequency of underage drinking and driving. According to the Centers for Disease Control one in 10 high school students drinks and drives. In Phoenix, AZ as many as 11.0 percent of teens in Arizona drink and drive.

An underage DUI arrest can be made even if the minor wasn’t driving. All that is necessary is that the minor was in “actual physical control” of the vehicle. An example of this is the vehicle was parked and the minor had ready access to the ignition key.

Arizona allows two exceptions for underage drinking under Arizona Revised Statute §4-244(34). One, the alcohol was consumed in a religious ceremony or two, a purely medicinal reason as long as it doesn’t put the public’s health in danger.

What are the consequences of a Baby DUI in Arizona?

The consequences of a baby DUI are not as harmful as an adult DUI but can have a significant impact. If convicted the underage defendant’s driver’s license can be suspended up to two years.

After the driver’s license suspension has been in force, the defense attorney may petition for a restricted license to allow the defendant to drive to school, meetings with probation officers, and to medical and behavioral health appointments.

If convicted, the minor will have a criminal record that shows up on background checks and a DUI conviction will result in several hundred dollars in higher automobile insurance premiums or cancellation of the policy. Insurance companies maintain increased premiums to remain in place for three to five years.

If the minor has been arrested for drinking and driving previously, the penalties can be more even serious.

In establishing punishment for an underage defendant the courts consider several factors including the following.

The minor’s parents or guardians in cases involving serious injuries or deaths might be criminally charged under Arizona Revised Statute 12-661 for “malicious or willful misconduct” by providing the teen with alcohol and be sued for monetary damages in civil court. Parents or guardians of a minor can be liable for as much as $10,000.

Parents and guardians must also pay for the minor’s stay in juvenile detention.

Can a Minor be charged as an Adult?

Arizona Revised Statute §13-501 allows juveniles ages 14 to 17 to be tried as adults if their DUI offense had an aggravated allegation such as causing a death or serious physical injury to someone after drinking and driving. Such situations raise the charge to a felony.

If your minor received the DUI ticket when 17 years-old, the prosecution can wait until the minor turns 18 and prosecute as an adult. This is very common.

Why was my Childs' Baby DUI elevated to a Felony?

If the minor causes a crash and hurts or kills someone including a passenger, the charge is elevated to a felony.

A felony can be charged if the underage driver had a passenger younger than 15 in the vehicle, was driving on a suspended license, or has two previous DUI convictions within seven years.

A felony conviction brings far more serious penalties. Colleges can also reject admission applications and it becomes more difficult to get a job or rent an apartment.

A felony conviction will stay on the minor’s record for life.

Defending a Baby DUI in Arizona

The goal of the defense is to win a dismissal of the charges or a reduced charge. The defense attorney has several avenues to pursue depending upon the facts of the case.

The defense will challenge the state’s evidence on Constitutional grounds. Authorities are not infallible so the police report may contain errors or falsehoods. It may also be possible to enter into a plea agreement to a lesser charge and a more lenient punishment.

If your child is under investigation or arrested for underage drinking and driving, it’s crucial that you protect your minor’s rights by hiring an experienced DUI Defense Attorney.

Aaron Black offers free, confidential legal consultations. At our consultation, I will gauge the strength of the state’s case, explain the law and your options, and answer your questions.

I am available anytime during the day or night and I’ll respond quickly unless I’m in court.

Contact Phoenix, AZ DUI Defense Attorney Aaron Black if your child has been arrested for drinking and driving or call (480) 729-1683 for a free telephonic conversation.