How to Ruin Your Life in One Night

Bad judgment, peer pressure, addiction, a chance encounter, these are catalysts for destroying in a single night all that has been achieved over a lifetime, and sometimes taking another’s life.

This life changer has a name – Felony DUI in Phoenix, AZ

Recent case-in-point is Las Vegas Raiders’ wide receiver, Henry Ruggs III, 22, was arrested for DUI causing death, serious bodily injury and reckless driving. The prosecution said in court that his Corvette slammed into the back of a Toyota RAV4 at 127 miles per hour at 3:30 a.m. Its fuel tank exploded and burning vehicle was shoved 570 feet killing Tina Tintor, 23, and her Golden Retriever Max.

A blood test showed Ruggs was intoxicated at .161 blood-alcohol concentration, twice the legal limit in Nevada. Ruggs was released from the team and posted $150,000 bail. His defense attorney rightly urged the public to reserve judgement until the investigation is finished.

Arizona also has strict laws and harsh punishments for drivers who get behind the wheel impaired by alcohol or illicit and prescription drugs. A misdemeanor DUI is bad enough; but when the offense enters felony territory, prosecutors and judges take the safety of people who share our roads very seriously. 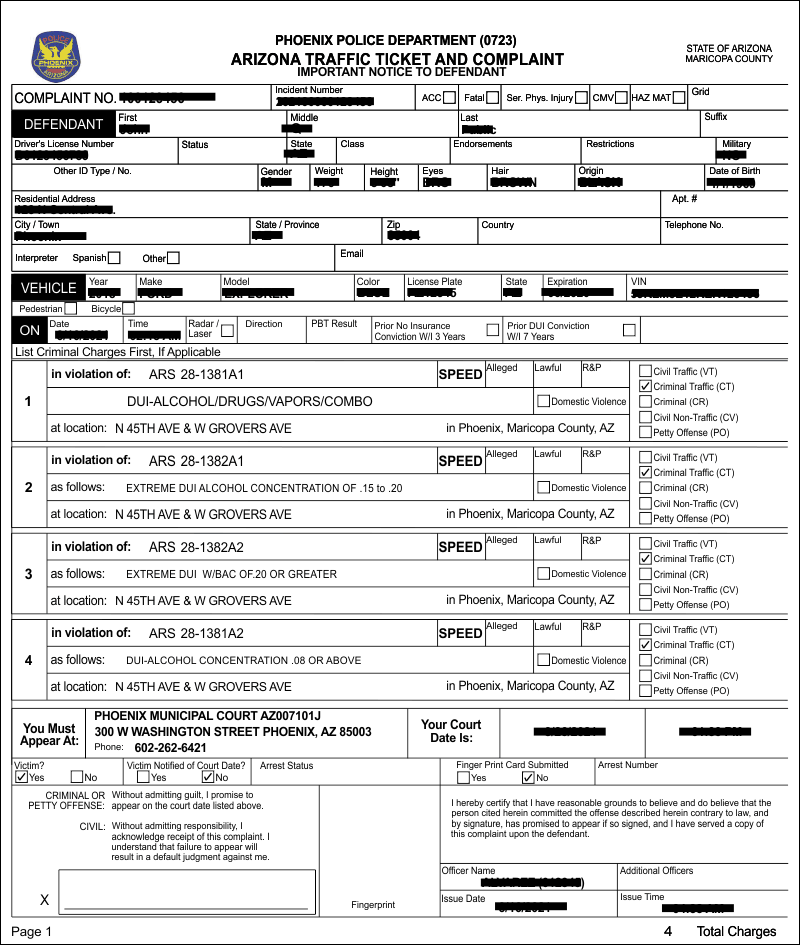 Arizona Revised Statute 28-1383 has five paths leading to a life-ruining felony DUI charge and felonies are ranked in six classes, with Class 1 the most severe.

In situations that one or more of these offenses is committed at the same time as a DUI, the state will charge an aggravated DUI with enhanced penalties.

Impaired drivers who kill or seriously injure someone are charged with murder, DUI related homicide or vehicular manslaughter, depending upon the facts of the case. These “dangerous” offenses come with significant two-digit prison sentences. The defendant also is open to a civil lawsuit seeking monetary damages, even if acquitted, and the burden of proof is less than in criminal cases.

Killer on our Phoenix roads

DUI-related fatalities happen far too often and the people who cause them come from across the social and financial spectrums.

The National Highway Transportation and Safety Administration (NHTSA) reports that nationally a person is killed by an impaired driver every 52 minutes totaling more than 10,000 fatalities each year. These fatalities include children.

In Arizona, 35 percent of all fatal crashes involved alcohol intoxication according to NHTSA’s records from 2018. Data from 2020 is not yet available.

Over the decades, DUI related fatalities have decreased as Mothers Against Drunk Driving (MADD) and other activist groups raise awareness, aggressive law enforcement of DUI laws and the resent availability of ride sharing companies.

Impacts of a felony DUI conviction

The ramifications of a felony DUI conviction with or without related manslaughter or vehicular homicide will ruin a life.

A felony DUI conviction in Arizona means prison and thousands of dollars in fines and surcharges, along with defense attorney fees, all leading to bankruptcy. Licensed professionals such as teachers, real estate agents, accountants and other professions will have their licenses revoked, ending a promising career. Media publicity will add embarrassment, shame, and ridicule.

Beyond those detriments, a convicted felon will not be allowed to own or possess a firearm; and if that is violated, it means going back to prison. Keeping or getting a job will be problematic, adding financial burden. Landlords can refuse to rent a felon a place to live. Felons cannot vote in elections, hold public office, join the military, or apply for food stamps.
Convicted felons must live with their criminal record for 99 years.

Most severe are years of prison incarceration. The length of a prison sentence is determined by Arizona’s sentencing guidelines, which are divided into three categories -- mitigated, presumptive, and aggravated.

Mitigated considers the defendant’s favorable history, such as no previous criminal record, or the defendant accepts responsibility and is remorseful. Presumptive is a middle ground in the length of a sentence. Aggravated is used when having a child in the car while driving impaired or using some force in the situation. Judges in determining a sentence have some latitude if they choose to do so.

Defendants who have a previous DUI conviction will face more incarceration and fines.

Defenses to protect your freedom

In the light of day, protecting your freedoms is paramount and a strong defense becomes the only avenue to prevent ruining your life.

The law provides defenses to ensure that the authorities have done their job properly and do not run roughshod over your rights. The prosecution has to prove its case beyond a reasonable doubt, so establishing doubt requires a thorough evaluation of the state’s evidence and what the arresting officer did or did not do under Arizona law.

The best way to begin your defense is at the traffic stop. The officer will start asking questions and it is in your best interest to decline to answer, as it is your constitutional right under the Fourth Amendment and to have an attorney present during questioning under the Sixth Amendment. The officer must advise you of these rights at the moment of arrest, so why not use them at the beginning because anything you say will be used against you.

These are common defenses:

Other defenses may be available depending on the facts of the case.

I believe that good people can make a mistake and deserve the best defense possible. At Aaron M. Black Law you will receive personalized service and will not be handed off to an assistant. You will always to be talking to me at every stage of the case.

Obtaining legal representation promptly is crucial. Begin your defense by calling 480-729-1683 at any time, day or night, weekends or holidays, or use my online contact form and I will respond promptly unless I am in court or at trial. I defend felony DUI cases in federal, state, city and justice courts in and adjacent to Maricopa County, including Phoenix.