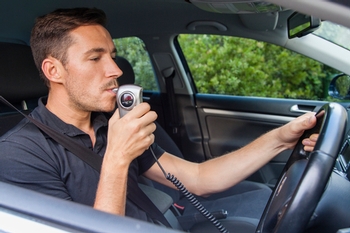 Hidden danger lurks for those ordered by a court to use an ignition interlock device (IID) under Arizona law.

These cell phone-sized devices are designed to stop drivers who are convicted of a first or repeat DUI from driving while impaired.

This is accomplished by preventing their engines from starting if alcohol is detected when exhaling into the IID, which is connected to a vehicle’s electrical system.

An IID requires you to Randomly Exhale

The issue is that once the engine is running the IID requires the driver to exhale into it to ensure alcohol wasn’t consumed while driving or if a different person had first blown into the IID. This is called a “random rolling reset.”

Failing to respond to the reset by stopping and turning off the ignition, which happens at random times, will set the horn honking and lights flashing while the driver takes a hand off the steering wheel to get the IID and then blow into it for several seconds. Very distracting. Stressful, too, on a busy freeway or in city traffic quite dangerous and even deadly.

The Fort Worth Star-Telegram reported in November 2017 that an 18-year-old woman died a week after a pickup truck slammed broadside into Alexis Butler’s Toyota Camry as she was backing out of her driveway onto a two-lane road in the dark at 6:20 p.m. The impact threw her car off the roadway and the pickup veered off the pavement striking a street light. The pickup’s 31-year-old driver wasn’t hurt or impaired.

The New York Times story said the pickup driver told investigators that he had dropped the IID on the floor after blowing into it and he fumbled to reach it taking his eyes off the road. There were no skid marks to indicate he used the brakes. He pled guilty to manslaughter.

The Times article also provides additional examples of dangerous IID incidents, including a California wreck that injured a woman and killed her husband in a head-on highway crash.

The Proliferation of IIDs

The court's use of IIDs as part of a DUI conviction has steadily increased over the years, according to an annual survey by the Traffic Injury Research Foundation USA, Inc and reported by National Public Radio. The foundation used data from six IID manufacturers.

Ignition Interlock Device use in Arizona

Arizona has some of the toughest DUI laws in the nation and a no-tolerance policy that means an arrest is made even if someone is just “slightly impaired” or if their blood-alcohol concentration (BAC) is less than the base point of 0.08 percent.

Lawmakers added IID surveillance, Arizona Revised Statute 28-1464 in 2007, one of the first states to do so for first-time DUI offenders. Previously an IID was only required in aggravated and extreme DUI cases. Our state also doubled the time an IID is connected to a vehicle from six months to one year and longer for repeat DUI offenders.

To be constrained with the use of an IID, which allows the offender to start driving again on a restricted license, the suspension or revocation of a license to drive must have ended.

Certain state-of-the-art IIDs have a built-in global positioning system and a digital camera to ensure compliance. It can track an IID user and record a violation by sending its results wirelessly or electronically.

Tampering with an IID or getting someone else to blow into it is a class 1 misdemeanor and adds another six months to the time it must be fitted to the vehicle and the offender may be expelled from the IID program and put back on a license suspension or revocation.

Although IIDs have reduced the number of repeat offenders by 70 percent according to the Centers for Disease Control and Prevention, the dangers of a random rolling reset on the roadways are a serious concern.

In many cases, it’s best not to be restricted by an IID. Judges have discretion in handing down DUI sentences that can avoid an IID, such as reducing the DUI charge to a lesser offense.

IIDs and their technicians aren’t infallible. The machines can have reliability issues and can give false readings because of software glitches, inadequate maintenance, and technicians can make mistakes.

Even certain foods can be misidentified by the machine as alcohol.

If you or a loved one are facing a DUI charge with an IID potentially in your future don’t guess about your situation and hire a DUI Defense Attorney immediately.

Attorney referrals can come from family and friends, and if that isn’t working you can research DUI Lawyers-Online such as the following. These sites can offer insight to their experience and legal capabilities. Phoenix DUI Defense Attorney Aaron Black offers free legal consultations. I will ask questions about the circumstances of your arrest, answer your questions, explain the laws involved, assess the probable strength and weaknesses of the state’s case and discuss your options.

I have extensive experience aggressively defending DUI cases in Arizona’s municipal, county, state and I provide personalized service so I can assure you, you won’t be talking to a legal assistant during your case.

Contact the Law Office of Aaron Black or call (480)729-1683 for a free legal consultation. I’ll respond promptly unless I’m in court. My line is open 24 hours a day including weekends and holidays.