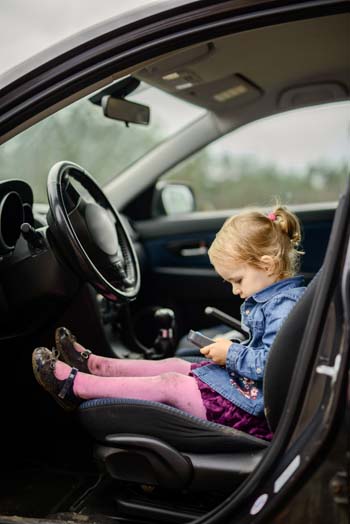 A few months ago, a woman in Peoria was stopped and found to be far beyond the 0.08 legal limit testing at .254 percent. But worse she had four “screaming and crying” children in the car with her.

Police immediately arrested her on four counts of aggravated impaired driving with passengers younger than 15 and police took her into custody. A family friend picked up the children at the arrest scene and police impounded the vehicle.

Driving while even slightly impaired with children younger than 15 in the car is grounds for a Class 6 aggravated felony, one step up from a misdemeanor charge, under Arizona Revised Statute 28-1383(3).

She was also seen driving south in northbound traffic lanes just before the traffic stop and authorities charged her with an even more serious charge of driving the wrong way on a highway, a Class 4 felony.

Arizona has some of the toughest DUI laws in the nation and an aggravating factor will raise a misdemeanor DUI to a far more serious felony offense. The law allows several ways to elevate a standard DUI into an aggravated felony DUI beyond transporting minors.

Arizona has six types of felonies, with Class 6 as the entry into felony territory. Most aggravated DUIs are Class 4 felonies.

Drivers who have two previous DUI convictions can be charged with an aggravated Class 4 felony if a third DUI conviction happens within seven years of the first conviction’s date. Anyone who is intoxicated and driving the wrong way on a highway commits a Class 4 felony.

Causing injury to someone, even a passenger in your own vehicle, or damage to someone else’s property while intoxicated or on drugs is a Class 2 felony.

Those who drive while their license is suspended, restricted, canceled, revoked, or refused are charged with a Class 4 felony.

Failing to have a court-ordered ignition interlock device (IID) installed is a Class 6 felony.

Those who are convicted of this Class 6 felony Drivers who don’t have a previous felony conviction for any type of offense will spend a minimum of 10 days in jail, but nine of those days can be suspended if the defendant successfully completes alcohol abuse classes at their own expense. Someone who is spending one or two days may be eligible for the work furlough program so they can leave custody to go to work or school and return to custody at the end of the work or school day.

If the child is injured in a DUI crash a Class 2 felony with serious prison time is charged.

The court can levy fines, fees, surcharges, and an assessment totaling $4,675.50.

The privilege to drive will be revoked for one year and after 90 days, a restricted license can be issued by the Arizona Motor Vehicle Division which will require SR-22 auto insurance, a fee-based certificate showing insurance coverage is in effect. Auto insurance rates will go up or the insurance company may cancel the policy. An ignition interlock device must be installed in the vehicle with installation and monthly rental fees.

The court may order a period of probation, community service, and participating in the Mothers Against Drug Driving’s victim impact panel.

Ramifications of a felony conviction include loss of the Second Amendment right to own and possess a firearm and the right to vote in elections. Getting and keeping a job will be more difficult as well as renting a place to live. Those who have a professional license, such as teachers and financial services advisers, will lose the license to practice their professions. The media, as we’ve seen, will make your situation public.

A felony conviction will stay on the public criminal record for life.

If you’ve been charged with this felony, your defense begins at the traffic stop. The state must prove its case against you beyond a reasonable doubt. An experienced DUI Defense Attorney in Phoenix, AZ , preferably one with specific skills as a Phoenix Aggravated DUI Defense Attorney, can challenge the validity of the state’s evidence and protect your rights.
The defense will challenge the results of the breathalyzer tests. The machine may not have accurately measured the alcohol in your system because of a calibration error. Your metabolism might have processed the alcohol rapidly reducing the amount in your blood.

If blood is drawn to show the alcohol level, it may have been improperly stored and its accuracy is questioned.

Sobriety tests can be unreliable. A person may not be physically able to stand on one leg. Each DUI case has its unique fact pattern so other defenses may be available.

Should the state have an iron-clad case, to save time and court expenses the prosecution may offer a reduced charge with more lenient penalties. In some cases, it may be possible to reduce a Class 6 kid in car felony to a less serious Class 1 misdemeanor.

Don’t guess about your situation. It’s imperative to have an experienced defense attorney at the earliest possible moment.

The Law Office of Aaron Black offers a free, confidential legal consultation. I’ll explain the law, the legal procedures, and answer any questions you have.

Contact Phoenix, AZ DUI Defense Attorney Aaron Black, or call (480) 729-1683 for a free consultation. I can evaluate your case and review any related documents you have by email and on FaceTime. I provide personalized service so you’ll always be speaking with me not an assistant.

I defend Kid in the car aggravated DUI cases in Arizona’s justice, municipal, state, and federal courts.
In light of the Coronavirus pandemic, I wanted to inform clients and potential clients I am still available for consultations. I am always available by phone, text and/or email. We can also use Facetime for social distancing. The criminal justice system is not stopping due to COVID-19.