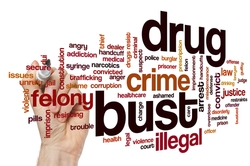 A former star of the “Deadliest Catch,” Jacob Harris was arrested a couple of weeks ago in Phoenix. Harris has been charged with suspicion of felony theft, possession of dangerous drugs and illegal possession of prescription drugs.

Harris is accused of felony theft after he allegedly took a female companions car without permission. When questioned by police Harris reached into his pocket to show the officer that he didn’t have the female friend’s car keys a small baggie fell to the ground. The baggie contained pills and he has been charged with suspicion of being in possession of prescription drugs and crystal meth.

Felony offenses are the most serious criminal charges as they are more severe than misdemeanors and carry much harsher punishments. If you have been charged with a felony, it is imperative that you hire an experienced criminal defense attorney. The Law Office of Aaron Black offers low cost, personal representation. Unlike many large firms that want as many cases as possible, I represent a limited number of clients at any given time which allows me to provide the personalized service that you expect from a DUI attorney.

Felony Criminal Offense Penalties with no prior conviction

Class 6 felony carries a maximum punishment of 2 years in prison, 3 years of supervised probation and a $150,000 fine and surcharges. Class 6 felonies can include charges such as possession of drug paraphernalia, resisting arrest, aggravated DUI, theft, and possession of marijuana."

A class 5 felony offense carries a maximum punishment of 2.5 years in prison, 3 years of supervised probation and a $150,000 fine and surcharges. Some examples of class 5 felony offenses include theft of a credit card, unlawful flight from law enforcement, criminal damage, theft and aggravated assault on a police officer.

A class 4 felony is punishable by a maximum punishment is 3.75 years in prison, 4 years of probation and a fine of $150,000 plus surcharges. Class 4 felony offenses include aggravated DUI, possession of narcotic drugs, possession of dangerous drugs, misconduct involving weapons, forgery, identity theft and burglary.

A class 2 felony offense is punishable by up to 12.5 years in prison, 7 years of probation and a fine of $150,000 plus surcharges. Class 2 felony offenses include possession of narcotic drugs for sale, possession of dangerous drugs for sale, manslaughter, aggravated assault, sexual assault, child prostitution, armed robbery, assisting a criminal street gang, burglary, discharging a firearm, theft and fraudulent schemes.

A class 1 felony offense is the worst crime a person can be charged with and is reserved for murder charges only. A class 1 felony carries a minimum of 25 years to life and has a maximum penalty of the death sentence.

When your freedom is at risk, contact criminal defense attorney Aaron Black or call to set up a free consultation today at 480-729-1683.