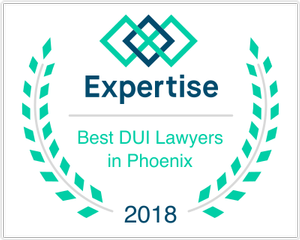 I am proud to say that I made the "Top 20 best DUI Lawyers in Phoenix" list on Expertise again! Expertise annually creates a list of the best local professionals in each US city to give their readers the confidence they need to make the right choice.

When searching for best DUI Defense Attorneys in Phoenix they analyzed and scored each business on more than 25 variables which include reputation, credibility, expertise, and professionalism.

Expertise uses proprietary research and selection processes to identify the top service professionals in over 100 business categories covering over 1000 cities. They feature only objectively quantified and qualified professionals.

I have never had a desire to ruin anyone’s life by putting them in jail so I decided early on in my career focusing on DUI defense was the path that I wanted to follow.

I personally represent my clients with the goal of keeping them out of jail and dismissal of their case. I do not care if my client committed a crime, as a matter of fact, it’s not even a question I ask. As a DUI Defense attorney, my job is to make sure that my client's rights are protected while in the court system.

I understand that good people sometimes find themselves in bad situations and when facing harsh DUI penalties in Phoenix, AZ, you need an attorney that you can trust as the penalties in Arizona for DUI are stiff. For instance...

Defending client in all Arizona courts

As a leading criminal defense attorney in Phoenix, my focus is only on defending individuals charged with serious crimes such as a DUI which carries life-altering punishments and ramifications. Personally defending clients in all Arizona justice, municipal, state and federal courts in Phoenix and surrounding Arizona cities, when your freedom is at risk I will "Deliver Justice and Defend Your Freedom.”

When your freedom is at risk, contact Phoenix DUI Defense Attorney Aaron Black or call 480-729-1683 to set up a free consultation.