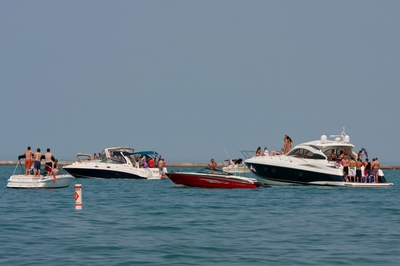 Operating a watercraft on Arizona’s lakes and rivers can make wonderful memories with family and friends, but beware as authorities will be aggressively hunting for operators who are impaired by alcohol or drugs in the “slightest degree” this Memorial Day weekend.

They have a strong presence at the seven water recreation sites in the greater Phoenix area: According to Arizona Game and Fish which registers boats, more than 125,000 watercrafts are registered and the waterways can get crowded.

Arizona statistics show that alcohol or drug impairment on the waterways is the main cause of watercraft-involved accidents, injuries, and deaths, which is why authorities are aggressive in enforcing this law.

Operating a Watercraft Under the Influence (OUI)

Operation of watercrafts while impaired is addressed in Arizona Revised Statute §5-395 that states anyone who is operating or in “actual physical control” of a craft that has an engine while intoxicated by liquor, drugs, or a vapor is breaking this law.

Actual physical control means that the impaired operator is capable of operating the craft and is in close proximity to the controls whether the craft is running or not.

Arizona’s no tolerance policy enacts harsh penalties for boating while impaired. These are the same as driving intoxicated on roads. Those who violate this law face being convicted of a class 1 misdemeanor, the most serious of the state’s three levels of misdemeanor offenses. Note that plea bargaining to a lesser offense isn’t an option in OUI cases and the charge can’t be dismissed in return for a guilty or no contest plea, but your case may still be dismissed for insufficient legal or factual reasons to move the case forward.

Those who cause injury or death to other boaters will face additional charges, such as bodily injury or negligent homicide.

Legal Reasons Authorities Can Stop You

Even a small infraction of Arizona’s boating laws gives authorities sufficient reason to stop you, and if they suspect you’re impaired, they’ll ask you to take a field sobriety test. However, after two hours if the BAC is 0.05, it’s presumed that the defendant was under the legal limit.

These are common reckless acts that authorities look for: When an officer indicates for you to pull over you need to maneuver to allow the officer’s craft to glide alongside your vessel and stop.

What Should I do if I’m stopped by the Police?

The best thing to do when the officer starts asking questions, such as “Have you been drinking this afternoon?”,  is to decline to answer in a respectful tone and invoke your Fifth Amendment right to remain silent and that you want a qualified defense attorney at your side.

It may seem awkward to refuse a law officer, but you have the right not to incriminate yourself, and the officer knows it. In stopping the questioning, you begin your defense because anything said becomes evidence against you.

Deciding not to take the sobriety test may result in the suspension of your driver’s license.

Watch out for Holiday Check Points

To deter excessive drinking and drug use, on the water check points and saturation patrols are routinely set up by authorities during Arizona’s boating season, March through September, with the holidays during those months getting extra attention to prevent deaths and injuries.

Power boats, sailboats that have small engines, and personal watercrafts including canoes, kayaks, jet skis, and paddle boats can be stopped at these check points.

Unlike road-going vehicles, in recreational boating, it’s entirely lawful to carry an open container of alcohol onboard.

Each case has its own specific circumstances that can determine a defense, which can be similar to defenses for driving under the influence. These are common defenses:

Get a Free & Confidential Case Review

If you or a loved one is facing an OUI charge it’s in your best interest to be represented by an experienced DUI Defense Attorney.

Contact Phoenix DUI Defense Attorney Aaron Black for a free telephonic legal consultation 24 hours a day without any obligation. Call 480-729-1683 to assess your case and learn about your options.