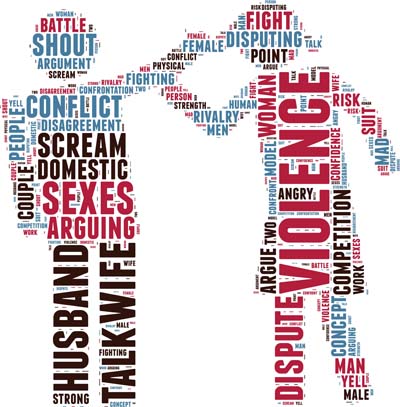 As you know, Governor Ducey declared a stay at home order on April 1, 2020, effective until April 30th. Until that time, the best defense is to stay at home.

Of course with the stress associated with the current state of affairs, being shut in with family may compound the situation. Emotions can flare over small things causing tempers to rage, ending in accusations of domestic violence.

Bad decisions can be made in seconds.

Arizona defines domestic violence as a criminal, abusive act performed by a member of a family or a household upon another member. Domestic relationships include spouses, former spouses, children, present and previous intimate partners, dating relationships, and elderly residents.

Furthermore, the Maricopa County Attorney’s office says 90 percent of domestic violence cases are prosecuted as the most serious of the misdemeanor offenses, and the penalties are as follows. A second domestic violence conviction allows prosecutors to ask for a harsher sentence.

A third conviction may be charged as a more severe felony with time in state prison and more substantial fines.

When there’s aggressiveness in the family or similar setting, and the situation elevates to the police being summoned, a criminal charge comes into play.

Arizona Revised Statute 13-3601 and its several subsections cover all aspects of domestic violence, which is comprised of several associated offenses, including:

This law applies to repeat defendants who have been convicted of second, third, or additional domestic violence offenses in Arizona or some other state and in tribal courts occurring within 84 months (seven years).

Crimes related to aggravated domestic violence cases under Arizona law §13.3601 encompass a long list of crimes that can lead to additional charges.

Crimes that can lead to additional Criminal Charges:

Arizona law allows for certain defenses depending on the circumstances of the particular event.

The defenses for aggravated domestic violence include the following. The knowledge and experience of a criminal defense attorney who defends domestic violence cases may determine other defenses based on your particular situation.

The Law Office of Aaron M. Black is an Essential Business

Governor Doug Ducey deemed that law firms are an “essential business” during the current stay at home order.

Although my office is open, I am practicing social distancing as deemed appropriate by the CDC.

If you’ve been charged with domestic violence in Phoenix, AZ or surrounding communities, we can always talk by phone or video chat. Even before the pandemic, 50% of all my clients hired me over the phone before ever meeting in person.

I can easily review documents that are emailed or texted to me, and payments can be made by credit card via email and Square® processing.

These are crazy times and Criminal Domestic Violence or even DUI charges can only compound an already stressful situation.

If you are facing criminal charges for domestic violence, Contact Phoenix, AZ Criminal and DUI Defense Attorney Aaron Black or call (480) 729-1683. I am available any time, day or night, on weekends and holidays.