DUI Bride in Arizona: The Importance of Remaining Silent 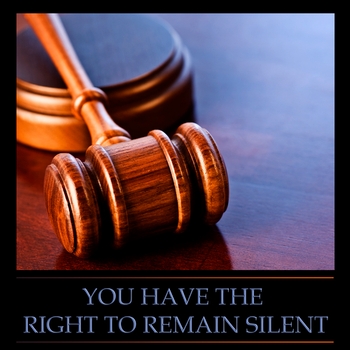 I can’t think of a better example for not talking to Arizona traffic officers at a DUI traffic stop or trying to talk yourself out of an arrest than the case police dubbed the “DUI bride.”

Around the Cyber World

Police in Marana Arizona northwest of Tucson responded to a car crash at 10:30 a.m. on Monday March 12 last year involving 32-year-old Amber Young. She was wearing a long, white sleeveless dress and told an officer that she was “anxious and nervous” and was on her way to her wedding that morning.

At the traffic stop she denied drinking although later at the police station she admitted having one class of champagne saying she didn’t want to “fess up” at the stop, according to police.

But she failed the routine sobriety tests and pleaded guilty to extreme DUI. That’s a blood alcohol concentration beginning at 0.15 percent opposed to the legal limit of 0.08. A DUI also can be charged if a person is even “slightly impaired” under Arizona’s no tolerance policy for driving while intoxicated.

The police released Ms. Young’s arrest photo on social media, they said to raise drinking and driving awareness with the phrase accompanying the picture, “Don’t drive impaired. Till death do we part doesn’t need any help.”

Her defense attorney sternly objected to releasing the photo of Ms. Young in handcuffs and argued that the release damaged “her reputation, dignity, and ability to obtain a fair trial” and that the picture resulted in numerous negative social media messages about the defendant.

Also, a police body cam recorded Ms. Young as she was questioned and sobriety tested. The video showed up on social media.

An arrest, as her defense noted, can harm a person’s reputation and hold that person up to ridicule on social media and such exposure is, unfortunately, part of the punishment inflicted on an arrested person who is by law presumed innocent, which is a right protecting everyone.

In the end, Ms. Young in June of this year pleaded guilty to extreme DUI and criminal damage resulting from the crash. She was sentenced to two days in county jail and seven days on house arrest, followed by a term of probation, reported AZ Family.com.

This case illustrates that it’s virtually impossible for a DUI suspect to talk his or her way out of the situation so it’s foolish to try.

The Ultimate Protection at the Arrest

The purpose of retelling this case is to show that anyone who is suspected of driving under the influence should immediately invoke the Constitution’s Fifth Amendment right that provides protections for individuals, including that a person cannot “be compelled in any criminal case to be a witness against himself.”

That means you don’t have to answer incriminating questions that law enforcement poses. And while interrogated, an experienced criminal defense attorney needs to be present to protect your legal rights. I know it can be difficult to decline to answer an officer’s questioning, beginning with have you been drinking? But police officers know all about the Fifth Amendment and a person’s right to remain silent and they must respect that or the case can be thrown out of court.

Authorities also know that under the landmark case Miranda vs Arizona, decided by the U.S. Supreme Court in 1966, police must advise that you have the right to remain silent and to have an attorney present. If they don’t so advise, the case must be dismissed. They don’t tell you any of that when they start asking questions, saving that vital information for the point of arrest.

The reason for remaining silent is because anything you tell an officer before or after an arrest will be used as evidence by the prosecution to get a conviction, and that can be difficult for the defense to overcome.

Remaining silent is the first step in building a defense. But as we see, a lot of suspects do talk to the cop, and everything is documented in the police report. Still, several legal challenges to the state’s case may be available, depending upon the actual circumstances of the event.

The defense will scrutinize the police report and the statements of any witnesses as it conducts an independent investigation questioning everything. The point is to establish a reasonable doubt that the defendant was impaired and the goal is to win a dismissal.

If the state has a strong case, the prosecution may be open to a plea agreement and offer to charge a lesser offense with a reduced sentence in exchange for a guilty plea. The defense can negotiate the agreement but it’s solely the defendant’s decision to accept the agreement or go to trial. The judge must accept the plea agreement.

If you’re arrested for DUI, police must allow you a phone call. It’s best to call an attorney or a family member or friend who can arrange for an attorney.

I have a long record of aggressively defending DUI cases and I arranged my law practice so each client has my full and personalized attention throughout all the steps of the legal procedures.