Celebrating Super Bowl Sunday 2017 in a no tolerance State 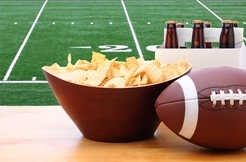 There are numerous Super Bowl Parties going on in Phoenix and surrounding areas this weekend and whether you plan on rooting for your team at Coach’s Corner Grill, Twin Peaks, or just celebrating with family & friends, make plans ahead of time to get home safely.

As you know, Arizona is a no tolerance state. With convictions carrying mandatory jail, fines, license suspension, and the ignition interlock device, utilizing Uber, Lyft or better yet a designated driver to ensure there are no life-altering repercussions is a smart decision. Depending on the blood alcohol concentration and history, jail can range from 1 day to 6 months for misdemeanors and up to 15 years for a felony.

$250 Fine
$210 Surcharge
$500 Prison Fund
$500 Public Safety Equip. Fund
$20 Time Pay Fee
$20 Probation Fee
In addition to the penalties listed above you will also face penalties from other entities and not just the court.

If unfortunately you do get pulled over by the police always remember you have a right to remain silent. Even if you invoke your 5th Amendment right to remain silent and you have requested a DUI Defense Attorney, the arresting officer may still try to ask you a standard set of DUI questions. Please do not answer without your attorney being present!

The only true way to save yourself from a DUI is to not drink and drive during the Super Bowl weekend, even if you only plan on consuming a couple of drinks. In fact, did you know that you can be charged with a DUI after consuming just two drinks?

To learn more about a drinking and driving in Phoenix, click here to contact me or call 480-729-1683 to set up a free consultation.