Can I get a DUI for consuming one or two drinks at dinner in Scottsdale Arizona? 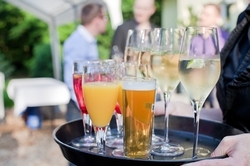 Whenever I am out at a restaurant I can’t help but notice the number of people having a cocktail with their dinner. This includes professionals, Moms and Dads and young couples all of whom are thinking that it’s ok to consume one or two drinks and later get behind the wheel thinking that they are fine to drive. In Scottsdale Arizona even one two drinks can get you arrested for a DUI.

For example, while on your way home from dinner you mistakenly make a wide turn and a police officer witnesses you doing so. He then proceeds to pull you over and when he approaches your window he notices the smell of alcohol on your breath. Of course his first question is going to be “Have you been drinking?” Because the officer has reason to suspect that you’ve been drinking the odds of you getting arrested for a DUI are very likely. Your first course of action should be to request a lawyer and invoke your right to remain silent.

With the harshest penalties in the country, Arizona laws for drinking and driving under the influence of .15 BAC can amount to jail time, fines, ignition interlock device (IID) and not to mention the overwhelming feeling of not knowing what the outcome will be. As always simple solution is to take a taxi, or of course designate a driver.

$250 Fine
$210 Surcharge
$500 Prison Fund
$500 Public Safety Equip. Fund
$20 Time Pay Fee
$20 Probation Fee
If you do get pulled over for a DUI, please remember that you have a constitutional right to remain silent and a right not to incriminate yourself. As always I encourage you to hire an experienced DUI Attorney that understands the complexities of DUI defense law. Your decision could mean all of the difference in your case.

If you have questions or you are facing DUI charges in Scottsdale, please click here to contact Aaron or call (480)729-1683 for a free consultation.