Can I avoid an Ignition Interlock by Not Driving in Scottsdale, AZ? 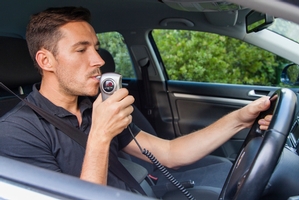 After a conviction for drinking and driving (DUI) in Scottsdale comes a year to eighteen months (for a first time DUI) of breathing into an ignition interlock device (IID). The machine, connected to the vehicle’s starter, prevents the engine from running if it detects alcohol on your breath based on a preset limit.

Some people in this situation may wonder if they can make the conscious choice in good faith not to drive at all for the duration of their sentence. That way they hope they can avoid having the ignition interlock aboard and blowing into the device every time they sit behind the wheel.

That certainly would avoid the installation expense and inconvenience of monthly maintenance of the ignition interlock device. Some companies in the ignition interlock monitoring business will install and remove the device for free, depending upon the vehicle, but maintaining it for about $120 a month, about $1,440 for the year, is on your shoulders.

Unfortunately there’s nothing in Arizona law that would permit a judge to allow you to make such a choice. You’ll still need the ignition interlock device under Arizona Revised Statute §28-1464 whenever you start driving.

Arizona has a no tolerance policy for driving while intoxicated and the ignition interlock device is a successful preventative measure. In 2008 Arizona was one of the first to require an IID with a first offense DUI conviction. While the devices were onboard they reduced the number of repeat DUI offenses by about 70 percent, according to the Centers for Disease Control and Prevention.

However, in a time of “substantial emergency” a person whose license is limited may under law drive a vehicle that doesn’t have an ignition interlock device in Scottsdale, AZ and surrounding areas.

Can I shorten the time an Ignition Interlock lock is required?

Although you can’t voluntarily stop driving all together to avoid an IID, Arizona law does allow reducing how long the device must be on the vehicle, called deferment under Arizona Revised Statute §28-3319 (H).

Arizona law requires an ignition interlock on a vehicle for one year if the DUI conviction was for a blood alcohol concentration (BAC) of less than 0.15 percent, and a minimum of 12 months for a BAC of more than 0.15 to 0.20. Any higher BAC and that time stretches to 24 months before you are eligible for deferment.

It’s possible to have the ignition interlock device removed after six months of documented use if several conditions are met.

The following conditions are:

IID and a restricted driver’s license

Offenders who are convicted of driving a vehicle without an IID installed on their vehicle face an additional year of using an IID.

To provide a higher level of keeping track of those convicted of DUI, Arizona legislators adopted and Gov. Ducey signed into law requiring ignition interlock devices, commonly called car breathalyzers, to have a digital camera, a global positioning system, and the ability to send its results wirelessly or electronically.

This law, SB 1150, became effective on July 1, 2018. However, those who have an IID that doesn’t have these features may continue to use what they have until their DUI sentence has been fulfilled.

Cheating can be greatly reduced because the camera confirms that the person using the device is the right person. Other states that have required this advance technology report significant decreases in the frequency of repeating drunk driving offenders.

The IID doesn’t detect drugs but manufacturers are developing a machine that can detect marijuana. Meanwhile a special cadre of officers are specifically trained to detect drug impairment.

I have helped many people in this situation reduce the time they had to use their ignition interlock device and defend accusations arising over device accuracy. Each case has different circumstances and results may not always be the same. But one thing is a must: Keep your IID maintenance and related records for evidence.

As a DUI Defense Attorney in Scottsdale, AZ I’m very familiar with the processes involved and can help with the paperwork and evidentiary issues that may develop so that all the requirements are properly addressed. My goal is to get you back on the road so you can get your mobile life back.

Learn more about ending your IID more quickly by taking advantage of my free legal conference to review your circumstances and your options. To get back on the road without testing again contact Scottsdale, AZ DUI Defense Attorney, Aaron Black or call 480-729-1683 for a free legal consultation.