Can Arizona’s Dram Shops and Social Hosts Be Liable? 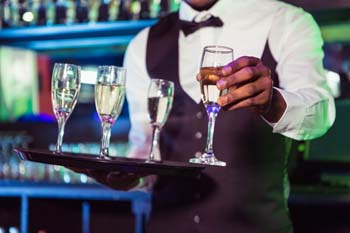 The good cheer of the holiday season and celebrating with friends and co-workers at private homes and public establishments that serve alcoholic beverages can become joyless if Arizona’s “dram shop” law, meant to decrease impaired driving, is violated.

Businesses serving alcoholic drinks are known as dram shops, a historic term for businesses selling spirits by the dram, which is the weight equivalent to one-eighth of an ounce. They include bars, nightclubs, and restaurants operating with an Arizona license to sell alcoholic beverages and are termed, licensees.

Businesses selling alcoholic drinks to minors or to those who are already “obviously” inebriated, can be held civilly liable for monetary damages. But only if the inebriated customer leaves and is involved in a crash that injures or kills someone or causes property damage.

The applicable law is under Title 4 of the Arizona Revised Statutes §4-311(D), which defines obviously intoxicated as a person’s facilities are substantially impaired and the physical dysfunction is obvious to a reasonable person.

Companion law A.R.S §4-244 makes it unlawful to serve, sell or furnish spirituous liquor to a disorderly or obviously intoxicated person.

A.R.S. §4-311(B) states, “No licensee is chargeable with knowledge of previous acts by which a person becomes intoxicated at other locations unknown to the licensee unless the person was obviously intoxicated.  If the licensee operates under a restaurant license, the finder of fact shall not consider any information obtained as a result of a restaurant audit conducted pursuant to section 4-213 unless the court finds the information relevant.”

To prove a civil liability case and win monetary damages, the injured party or the survivors of those who perish in auto crashes must prove by a preponderance of the evidence these elements of the law:

Arizona doesn’t follow what many states, such as California do in holding social hosts liable for civil damages.

A social host in Arizona law is someone, or some entity, that holds social events, parties, and gatherings of any size serving or providing alcoholic beverages, such as holiday parties at someone’s home.

A.R.S. §4-301 states that only the licensee or an employee of the licensee “—not a social host—” is liable for damages related to injuries sustained, to the survivors of someone who is killed, and property destruction caused in whole or in part by furnishing spirituous liquor to someone of legal drinking age.

An exception is that the social host is liable if the intoxicated person is younger than the legal drinking age - 21 in Arizona.

Party hosts should monitor guests for their alcohol consumption and limit how many drinks are served to each guest and not let an intoxicated person leave to drive. Perhaps hiring a bartender is much better than “bring your own.”

It’s also good to have a designated driver sign-up list for guests or hire a commercial carrier to get intoxicated celebrators home safely. These steps may serve to reduce the social host’s liability.

If you’re not selling alcoholic drinks, your party guests are responsible for their own choices.

For celebrations at a business, the proprietor should let the intoxicated individual stay until a ride home arrives.

Wait staff who knowingly serve an alcoholic beverage to an underage person without checking their identification can be charged with a class 1 misdemeanor, the most serious of the misdemeanor charges, and fined up to $3,000 and can be incarcerated for as long as six months if convicted.

What should I do if I’m stopped by the Police?

During the holiday season, authorities are on high alert for impaired drivers and station checkpoints around the valley to randomly stop motorists.

If you are pulled over, you need to begin your defense when the officer stands at your car door.

Under our Constitution’s Fifth Amendment we all have the right to avoid self-incrimination, so the best thing to do is to tell the officer that you won’t be answering questions and you want to have legal representation afforded by the Sixth Amendment.

Also, you can be arrested without driving by being in “actual physical control” of a vehicle. For example, if you pull over to sleep it off, be sure the ignition key is well out of reach.

Our state has some of the strictest DUI laws in the nation. Under Arizona’s no-tolerance policy anyone who is “slightly impaired” can be charged with a DUI. The blood-alcohol content (BAC) reaching 0.08 percent is a class 1 misdemeanor.

More serious DUI charges which are felonies are extreme DUI beginning at 0.15 percent BAC and super extreme is 0.20 percent and more.

If you or a loved one has been arrested or is under investigation for a DUI or a wait staff violation, don’t guess about your prospects, seek legal counsel immediately.

For free confidential legal advice, contact Phoenix, AZ DUI Defense Attorney Aaron Black, or call (480) 729-1683 any time day or night, including holidays. My goal is always to win a dismissal or an acquittal.