Beware of Summertime Boating and Drinking in Arizona 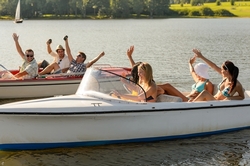 Summertime and boating go hand- in-hand on Arizona’s lakes and rivers but if you’re operating a watercraft while impaired one of several law enforcement agencies can ruin your day and in severe cases harm your way of life.

Just as on the streets, law enforcement is in force on the waterways, particularly on popular holidays. Officers of Arizona Game and Fish, State Park Department, and Maricopa County sheriff’s deputies are watching. Lake Havasu and certain other places are patrolled by the U.S. Coast Guard and federal authorities.

The greater Phoenix area has seven Lakes that law enforcement patrols: The Maricopa County sheriff’s deputies The Maricopa County sheriff’s deputies patrol the Salt River for boaters and tubers who are underage drinkers or impaired floaters escaping our sweltering summer heat. They wait in parking lots and roadsides for an impaired tuber to leave.

Arizona Game and Fish has more than 125,000 registered watercrafts on its books, so the waterways are crowded. Impairment by alcohol or drugs is the primary reason for accidents and injuries involving watercrafts.

Did you know you don’t have to be operating the watercraft to be arrested? All you have to be is in “actual physical control.” That means you can be sitting in the boat in close proximity to the controls, or a key on a chain around your neck, to start the engine and still be arrested. 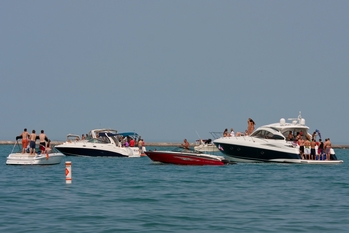 Other than that distinction, the blood-alcohol concentration (BAC) for impairment is the same on water as it is on roads.

Arizona has some of the toughest impairment laws in the nation with a zero tolerance policy for operating a watercraft while impaired to the “slightest degree.” That means if your BAC is below the baseline of 0.08 percent you can still be arrested on a Class 1 misdemeanor charge, the most serious of the misdemeanor classes, under Arizona Revised Statute §28-1381.

More serious OUI offenses are charged for BAC tests showing higher levels. A BAC of .15 is increased to an extreme OUI and a super extreme OUI starts at 0.20 BAC. An OUI charge becomes a felony if someone is hurt, killed or property is significantly damaged in a boating incident.

Reasons authorities can detain you

If you commit an infraction, no matter how small such as an expired boat registration, you can be detained.  Authorities look for reckless acts committed on the water: When you are ordered to stop, you must maneuver your craft to allow the officer’s boat to glide safely alongside your vessel and stop.

Should an officer suspect that you’re impaired, you’ll be asked to take a field sobriety test and breathe into a breathalyzer that determines your BAC. You can refuse to take these tests, but if you do your driver’s license can be suspended.

I always advise people to let the officer build the case and to not contribute to the investigation by convicting yourself in answering questions.

Example: “How much have you had to drink? That’s a leading question and establishes suspicion of intoxication. Just politely say that you prefer to exercise your constitutional right to remain silent. That’s your right under the Fifth Amendment. The questioning should stop but an aggressive officer may continue to question you so don’t be fooled.

You also have the right to have an attorney present during questioning to prevent you from aiding the state’s case.

Not answering questions is your first line of defense. Every OUI case has its particular set of facts and circumstances that will guide your defense. These are possible defenses:

A first offense for a Class 1 misdemeanor OUI is punishable by 10 days in jail, but nine of those days can be suspended if you successfully complete an alcohol/drug education class at your own expense. The financial penalty totals $1,510.50. It is possible to stay out of jail on a first time regular DUI.

If a felony conviction happens, you’ll be stripped of your right to vote in elections and the right to own and possess a firearm, among other life-altering events such as the loss of a job or a professional license.

Know your legal options by arranging for my free legal advice without any obligation to hire me. Just call Aaron Black Law at 480-729-1683 to schedule your consultation. I defend OUI cases in Arizona’s justice, municipal, state and federal courts and I provide personalized service so you’ll never be handed off to an assistant.