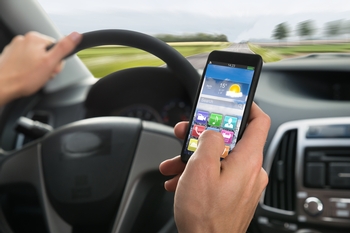 Years ago a popular bumper sticker read “Hang Up and Drive.” Now, Arizona means it.

Arizona on April 22 became the 48th state to outlaw texting while driving after a decade-long effort to prevent distracted driving, which is as dangerous as driving intoxicated.

With this legislation Arizona also became the 18th state to ban using a handheld cellphones while behind the wheel.

"This legislation represents an issue whose time has come when Arizona says it's no longer okay to text or do anything else with your phone behind the wheel," said Gov. Doug Ducey when signing the legislature’s bill into law. In attendance was the mother of fallen Salt River police officer Clayton Townsend who was hit and killed by a driver that police say was texting at the time of the crash.

“This is a tremendous thing, but at what cost?” the governor said. “So many families have lost their lives and so many people have suffered at the hands of a negligent motorist. The idea here is to get your eyes on the road, hands on the wheel and your mind on the task at hand. The objective here is to not write tickets, it's to save lives."

The law became effective at the signing but penalties won’t be enforced until Jan. 1, 2021 to give motorists time to adapt to the change.

What you need to know about the Texting Ban

Motorists can still use their cellphones when driving to call for help or to report a crime or while stopped at a red light and while parked. Besides talking on the handheld phone it’s also illegal to write, send, and read text messages, emails, internet data and instant messages.

Restrictions also apply to a “stand-alone electronic device” that has stored audio or video. Watching television while driving is already illegal.

The law covers using any electrical handheld device and makes it unlawful to simply hold the device or to “support” it using your body, but what that means in the law isn’t specific.

Exceptions to using your Mobile Device

If an officer sees you with a phone held to your ear or your head down and eyes on the keyboard between now and when the new law’s effective date you can be pulled over. You won’t be cited but you’ll get a warning. You won’t have to turn over your phone to the officer but there is a provision that says “when authorized by law.”

Also, if the officer sees in plain sight something illegal, such as the remains of a marijuana roll-up, you’re inviting trouble and you will far eclipse a traffic warning.

The first offense is punishable by a $75 minimum fine that could increase to $149. Additional violations start at $150 and tap out at $250. But the offenses don’t mean points on your driver’s license. The exception is if in violating the new law you caused someone to suffer a serious injury or death.

Should a texting driver seriously injure or kill somebody, criminal charges can result and civil lawsuits for damages can be filed.

The new law has a provision that requires the MVD to immediately start testing would-be motorists concerning the effects of using cell phones and similar devices.

The MVD is also allowed to suspend a commercial driver’s license if the driver violates the new law.

The governor on April 26 vetoed a separate, but related, bill aimed at distracted driving that would have allowed police to stop and cite a driver for doing something besides driving if the driver’s action or inaction creates an immediate hazard or the driver fails to use reasonable control of the vehicle.

That proposal was stricter than the new texting law in that it could be applied to many things unrelated to controlling the vehicle.

Communities that were ahead of Arizona

Communities with previous handheld phoning and texting ordinances can still be enforced, including provisions that are stricter than the new state law.

However, when the new law takes effect on Jan. 1, 2021 any provision in these communities that doesn’t reflect state law will vanish. These communities and their laws are: Others with ordinances for handheld-cellphone use while driving are:

If you have been arrested on criminal traffic violation or any other offense contact Pheonix Criminal Defense Attorney, Aaron Black or call (480)729-1683 for a free telephonic consultation. I defend clients charged with serious criminal offenses in all Arizona City, state, and federal Courts.