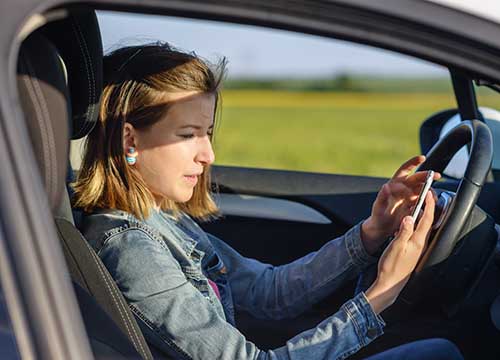 With the New Year, Arizona’s texting ban while driving law graduated from a warning to fines. And law enforcement can use violations as a pretext for a traffic stop and a DUI field sobriety test anywhere within the state.
Any unusual movement while texting, such as straddling a lane line, weaving, or making a wide turn, can be a tip off. And with the pandemic reducing travel along with DUI arrests, texting may capture more suspected impaired drivers. Lately, I have seen cases of drivers who are charged with a DUI even if their blood-alcohol concentration (BAC) is less than the baseline of 0.08 percent.

So now, with Arizona joining the ranks of states prohibiting texting while driving, those who are stopped and ticketed are fined between $75 and $149 for a first texting offense, and from $150 to $250 for subsequent violations under the amended Arizona House Bill 2318. Fines are civil penalties.

Anti-texting laws previously adopted by a number of Arizona cities are no longer valid now that the state law has superseded city ordinances. Notices will be posted on thoroughfares entering Arizona warning that testing while driving is not allowed.

If you are stopped for using an electronic communication device, the citing officer cannot take it from you or inspect it unless otherwise allowed by law.

These are the offenses for texting ban

Exceptions to the new texting law

The texting law does not apply to using these devices: radios, a citizen band radio, commercial two-way radios, emergency communication devices that require a subscription, medical devices that are prescribed, ham radios, a security system installed in the vehicle or a navigation systems.

If an electronic communication device has a feature to send a “do not disturb while driving” notice to callers, be sure to use it so you will not be tempted to answer the call while driving.

How the texting and driving ban started

Cars and trucks have a lot of weight and losing control of a vehicle can move the driver from a modest civil fine to a felony criminal charge.

An Arizona’s legislature penned the initial texting while driving ban in 2019 shortly after a Salt River police officer was hit and killed during a traffic stop on Loop 101 by a distracted motorist who was charged with manslaughter, aggravated assault with a deadly weapon and endangerment.

The officer had stopped a driver for an expired registration when the distracted driver after sunset crossed three lanes hitting Salt River tribal police Officer Clayton Townsend. The motorist he stopped was seriously injured. The driver was distracted for at least 17 seconds, according to a Department of Public Safety report.

The National Safety Council reports that using a cell phone and driving demands a lot of thought; and when those two activities happen simultaneously, the human brain cannot do either activity very well. The result is failing to see traffic signals and a pause in applying the brakes.

To make things worse, add a level, even a small level, of intoxication. Cell phone users who have even the “slightest” degree of impairment, and that can be less than the baseline, run the risk of being pulled over because of the distraction and they fall into a DUI criminal charge.

If an officer starts questioning you, such as how much have you had to drink, the best thing to do is to not answer. You have the right to remain silent under the Fifth Amendment, which is a protection against convicting yourself. It is also imperative; and your right under that Amendment, to have a defense attorney there during questioning. When exerting these rights, always be respectful to the officer.

If the officer wants you to take a breathalyzer test and you refuse, your license can be suspended for a year.

A DUI is a class 1 misdemeanor, the most serious of the misdemeanor class. The punishment for a first-time conviction is at least one day in jail, fines reaching to $1,250, and having an interlock ignition device that prevents a driver from starting the engine if a breathalyzer detects any amount of alcohol. The court also can order an alcohol screening, a program for alcohol education and treatment program, along with a community service program.

A number of defenses are available to fight a DUI charge, but one may be lost. The officer needs to have probable cause or a reasonable suspicion to detain you, which the texting ban provides if you are seen texting while driving down the road.

Beyond that, the tests administered can be faulty and other defenses may be available depending upon the facts of the case and every case is unique.

Aaron M. Black law is dedicated to aggressively defending people who are charged with a DUI and other crimes. He is ranked in the top one percent of the finest lawyers in the nation by the National Association of Distinguished Counsel and has extensive experience helping people in trouble. Contact him at 480-729-1683 or use the easy contact form. He will respond promptly unless he is in court. He defends cases in justice, municipal, state, and federal courts in and near Maricopa County.