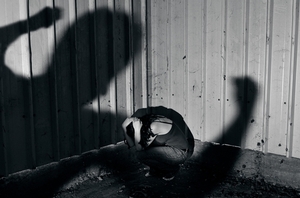 Arizona defines domestic violence as a criminal abusive act performed by a member of a family or a household upon another member. This includes spouses, former spouses, children, present and previous intimate partners, dating relationships, and elderly residents.

The Maricopa County Sheriff’s Office in May of this year adopted a policy establishing procedures for deputies to follow to thoroughly investigate and document an investigation of a domestic violence incident or a protective order violation.

The Maricopa County Attorney’s office says 90 percent of domestic violence cases are prosecuted as the most serious of the misdemeanor offenses, punishable by up to six months in jail, $2,500 in surcharges, plus hours and hours of domestic violence classes. A second conviction allows prosecutors to ask for a harsher sentence. A third conviction may be charged as a more serious felony with time in state prison and larger fines.

Besides the loss of freedom, a domestic violence felony conviction also means the loss of the right to possess or own a firearm, the loss of voting rights, and a criminal record that can mean difficulty keeping or getting employment.

At trial, a previous domestic violence conviction usually can’t be introduced as evidence; the present offense being the only issue. However, the prosecution may introduce the previous conviction at the sentencing phase in support of more punishment.

Be Cautious when Police Come to the Door

When the alleged victim, another family member or even a neighbor summon police, it’s human nature for a suspect to try and de-escalate the situation which skeptical officers see as a cover-up.

In questioning, the suspect may try to be cooperative by explaining themselves thinking it’s enough to satisfy police and they’ll leave. But Arizona authorities are serious about domestic violence and they’re not going away. The more that is said is more fodder the prosecution has to use for a conviction.

Evidence at the scene is also examined. For example, a big flat screen television is on the floor with the screen damaged. That’s called criminal damage, considered in the context a domestic violence offense, and can be sufficient for an arrest. An arrest for domestic violence also can be based on disorderly conduct when it involves people in a domestic relationship.

At the time police are at the scene or later on, the victim may have a change of heart and decide not to bring charges. But bringing charges is the prosecution’s choice. However, a victim who recants or changes a statement to police can make the state’s case difficult to win by becoming an uncooperative witness in failing to remember certain facts, causing a reasonable doubt and resulting in an acquittal.

Insufficient evidence is a defense. It could be that some evidence is determined by law to be inadmissible because of a police error such as failing to advise the person being arrested that they have the right to remain silent. Hearsay, a statement made by someone who was not present, is usually not admissible. However, an “excited utterance,” a statement made in an emotionally charged state of mind, may be allowed.

Self-defense can be raised if the defendant didn’t start or escalate the altercation and reacted to keep from being injured.

Sometimes an emotional episode in a relationship will cause someone to make a false claim and it falls on the defense to prove the lie.

Other defenses are available depending upon the circumstances of the incident and a history of those involved. The knowledge and experience of a criminal defense attorney who has defended domestic violence cases may determine other defenses.

If you’re arrested on a domestic violence related charge, you’ll need to find an attorney. A number of online resources to do that are available, including SuperLawyers.com, NOLO.com, and AVVO.com.

Criminal law and the procedures are complex so in your search look for an attorney practicing in Maricopa County who has extensive experience representing people charged with domestic violence crimes. You can ask attorneys about their experience and the results they achieved in domestic violence cases, such as winning or negotiating a plea to a lesser included charge. It’s also reasonable to ask about the attorney’s fees and fee schedule.

The attorney you choose needs to be an excellent communicator to explain the law involved, your available defenses and be responsive to your concerns.

I invite you to meet with me so we can discuss the situation you’re in and your options. To schedule your free consultation contact the Criminal Defense Attorney, Aaron Black or call 480-729-1683.